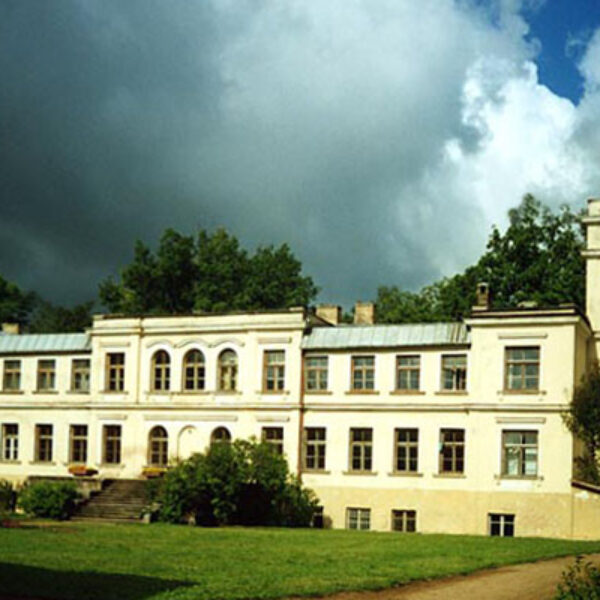 Alsviķi estate palace (Alswig) – the neo-classicism style palace and estate buildings were built in the middle and at the end of the 19th century. Alsviķi estate obtained its name from Alsvigi (Halswig) Family, who managed this estate already during the time of the Livonian Order (1576-1586). The children of the owner of the estate, Nikalaus von Alsvig, received their rights on the estate according to the order of Sigismund III in 1590. After the devastating Swedish-Polish War (1600-1629), Alsviķi estate was uninhabited. In 1631, the Swedish King, Gustav Adolf, rented the estate to Niklaus Henrikam fon Taube. During the following centuries the owners of the estate changed several times. In the second part of the 19th century, the possession of the estate was taken by Baron Alexander Ernst von Wolff. His only heiress was his daughter, Anna, who inherited Alsviķi, Krāgaskalns, Nēķens un Rēzaka estates. In the 1890s Anna got married to Ērgļi estate owner, Rudolph von Tranze (Rudolf von Transche-Erlaa), who was the senator in St.Petersburg. After the revolution of 1905, the owners did not return back to the estate. Anna, the Madam of Alsviķi estate, died in St.Petersburg in 1921. In the beginning of the 20th century, the estate belonged to different organisations, but on September 1, 1939, after the two years of the repair works, there was a school for unmanageable girls opened. During the years of World War II, the German Army units were located in the estate. After the war, there was an orphanage, later – a boarding school. On December 8, 1966 the Special Professional Technical Secondary school No.12 was opened here, but later – Alsviķi Special Professional Technical Secondary school. Since September 1991, there is the State rehabilitation centre for young adults with disabilities.