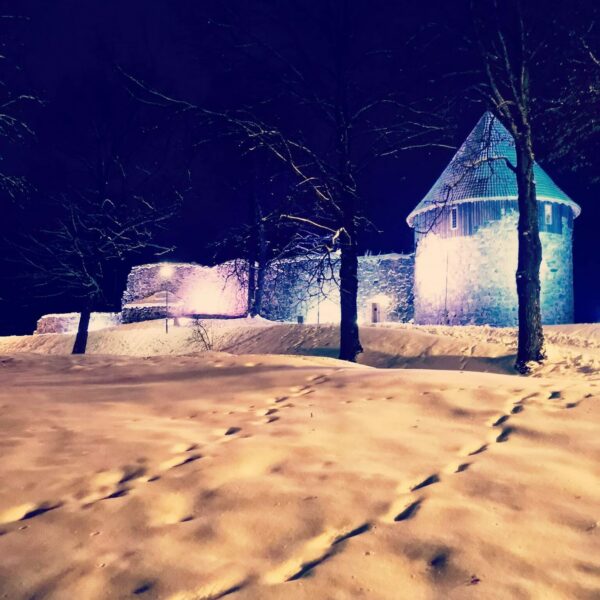 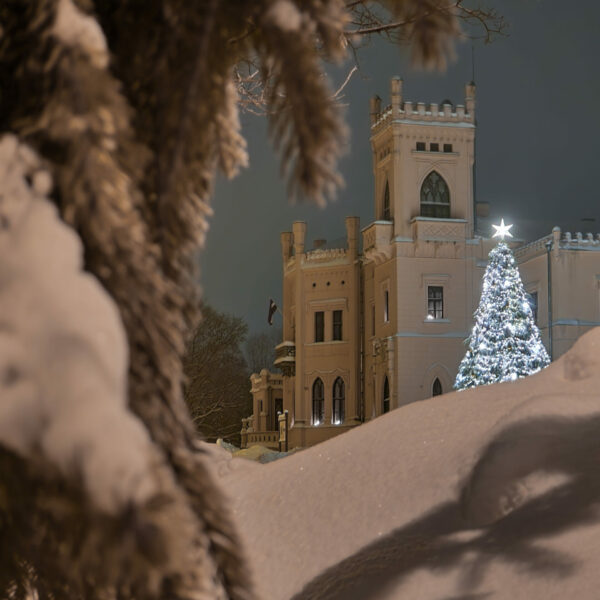 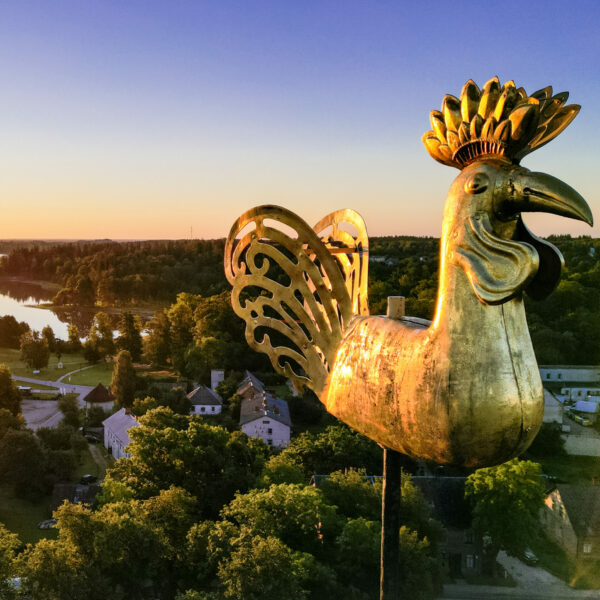 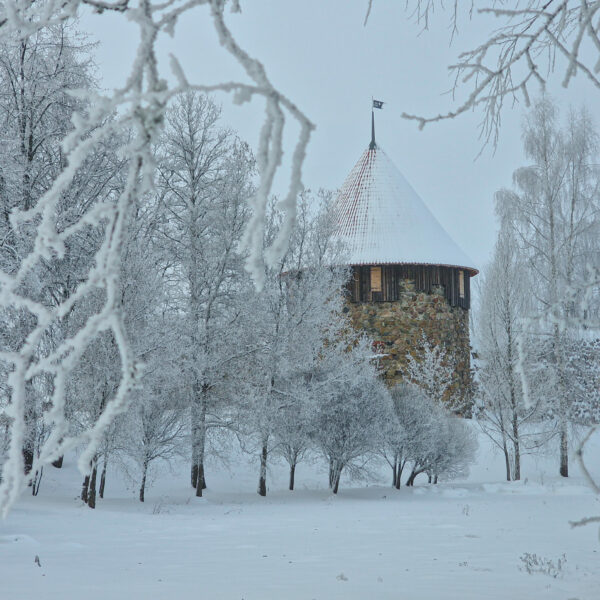 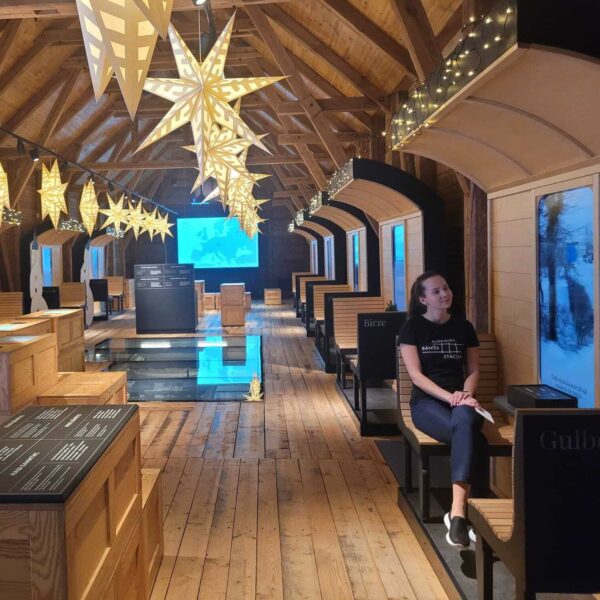 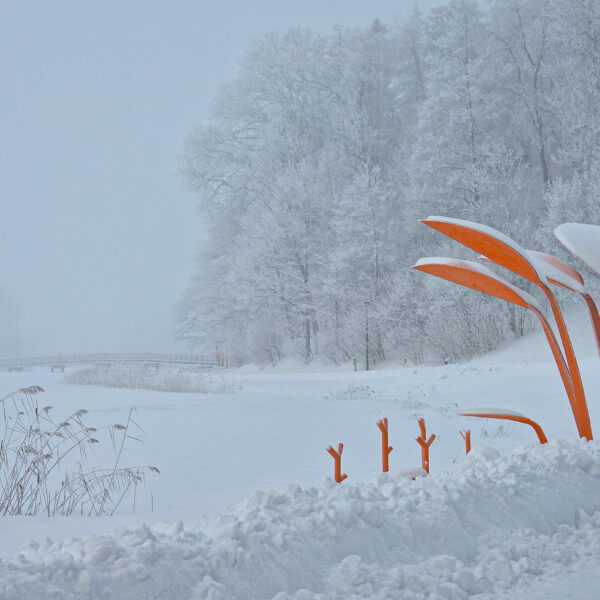 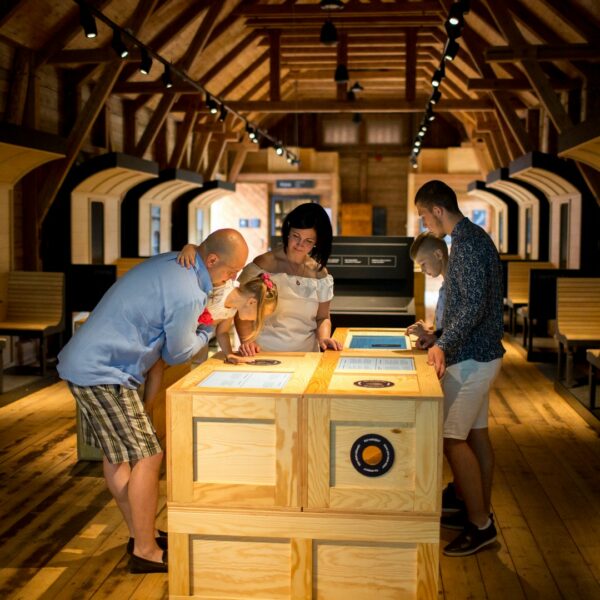 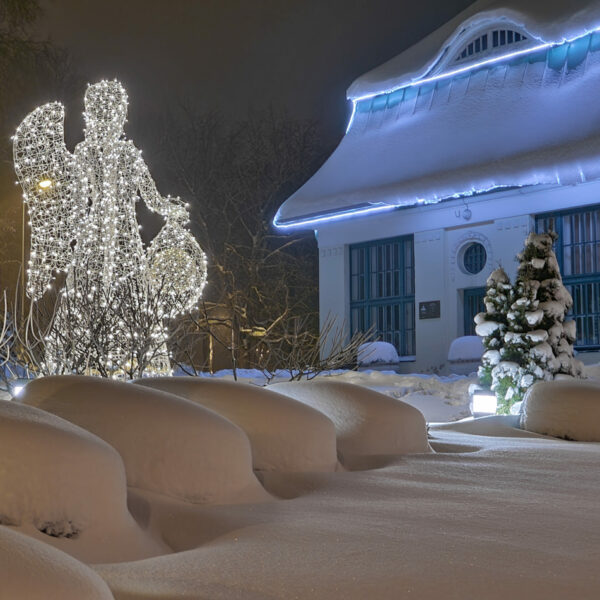 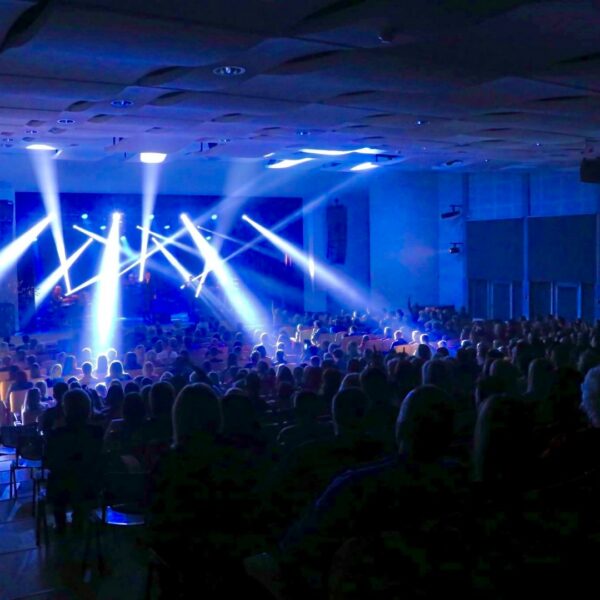 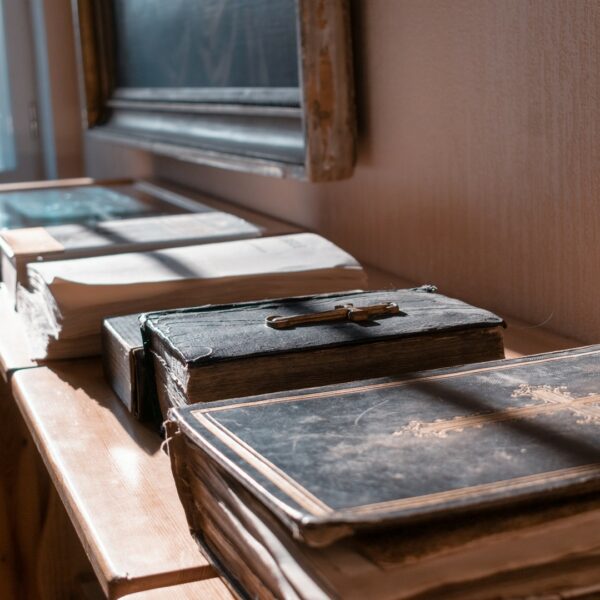 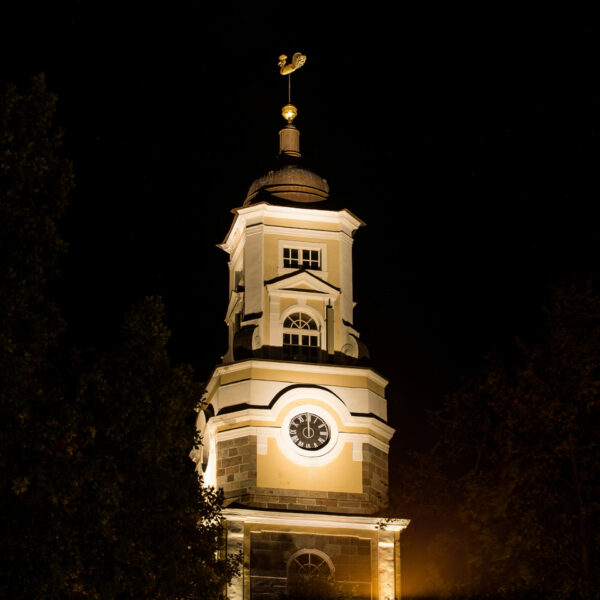 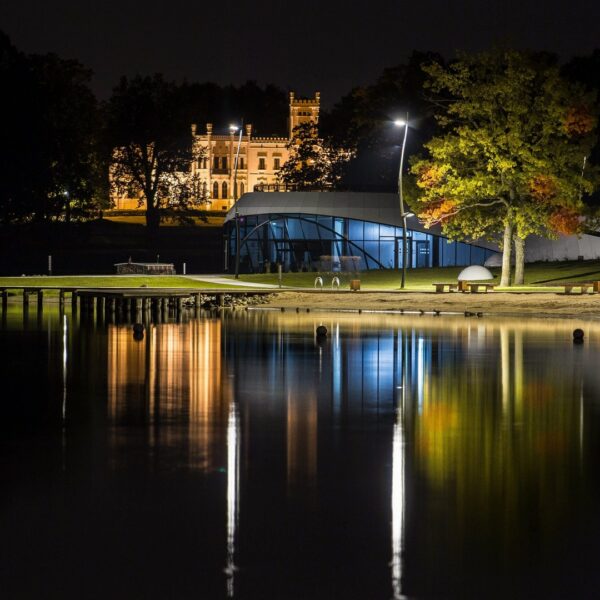 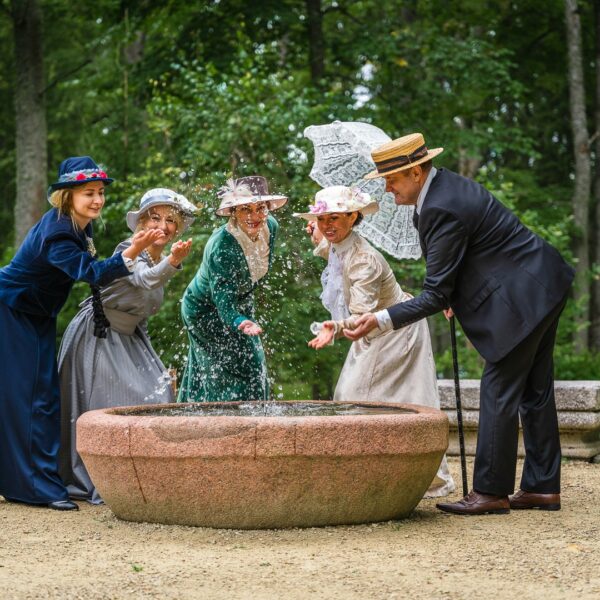 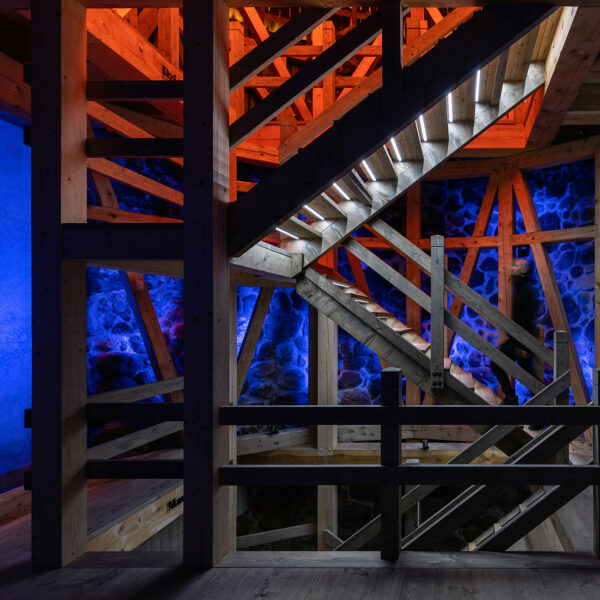 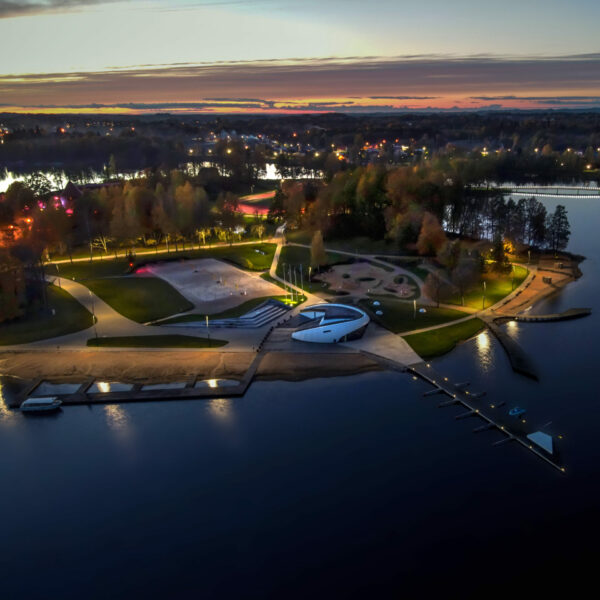 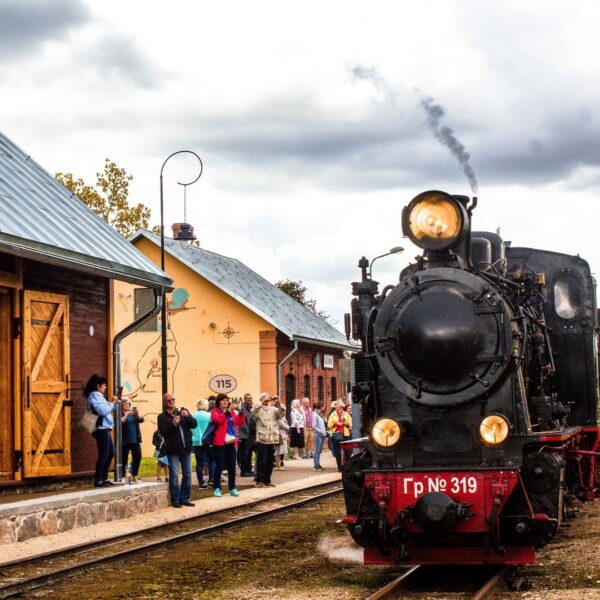 If you want to feel yourself as a nobleman? Visit Alūksne New Palace. It is surrounded by the park with the oak trees planted in the 18th century – the time when the park was developed. The park is unique for its small architectural buildings. An exciting walk along its paths visiting the Aeolus’ temple, the Granite Obelisk, the Alexander’s Pavilion and other buildings leads to the palace which Neo-Gothic nobility cannot be found in any other place in Latvia. The guests of the palace are welcomed by the Alūksne Museum and the Nature Museum “Vides labirints” (The Environment Labyrinth)..

It is not easy to choose the most beautiful landscape in Alūksne, but there is the place that makes it the highest town in Latvia – the Temple Hill park . In ancient times it was a Latgalian castle mound but nowadays the top of the hill is decorated with the Temple of Fame – the granite rotunda built in 1807 on the order of Baron von Vietinghoff. Nearby there is a pedestrian bridge called the Sun Bridge. In the park there is the highest sightseeing tower in Latvia. – from which you can enjoy an unforgettable view of Alūksne. The tower is 37.8 meters high and it is open from May 1 till October 31.

A beautiful town hides beautiful surprises. It seems that the dreamers’ hands have developed the Alūksne Manor Park. The beginnings of the park were marked in the second half of the 18th century when Baron von Vietinghoff-Scheel became the owner of the little Alūksne manor. Nowadays the park is ranked among the most significant monuments of history and culture in Latvia because of the number of small architectural forms preserved there. Even their names sound like a song – the Aeolus’ temple, the Bird Pavilion, the Granite Obelisk and others.

Decorated with carved boulder stones the tower of Alūksne church rises in the sky. The church built from 1781 to 1788 is one of the noblest early classicism monuments in Latvia. The view from the tower was so picturesque that the Baron ordered to build the oak stairs in it to make the ascent easier for the guests. There are no similar stairs in churches in Latvia. The church is home to treasure – the organ made by the famous craftsman August Martini.

Such miracles can happen only in Alūksne – the house where beer was brewed once offers cultural events now. The beer brewery built in the 19th century is the monument of architecture, and in the autumn of 2015 after the renovation it first welcomed the visitors as Alūksne Culture Centre. It is the place for creativity in all expressions. The Culture centre houses a modern concert hall, a national applied arts workshop “Kalme” as well as an entrepreneurship support centre.

It is easy to shift yourself from the town into nature if one of the cleanest lakes of Latvia is close at hand. For the pleasure of the town inhabitants and its guests, nature has given the lake wonderful shores, waters rich in fish and four islands. The biggest one is Pilssala (Castle Island) with the ruins of the Livonian Order castle, but Cepurīte (Hat Island) was inhabited already in the Stone Age. To have a closer view at these places you can have a trip on a little ship “Marienburg” or raft “Kaija”. Breath-taking emotions over Alūksne lake will be provided by zip-line “ZZZIPPP”.

Which one is more romantic – a castle or an island? Alūksne offers both at the same time as there is a castle on the island. The Livonian Order castle was built in 1342, and its walls were up to 2 metres thick. The legend tells that a girl was built in the wall of the castle . Her name was Maria thus the island is also called Maria Island. Nowadays a tower has been restored in the mighty fortress, where a sound and light adventure tells about the history of the castle in special musical tale“MARIENBURG the eighth brother”. Island also has a pedestrian path around the castle ruins, a swimming area, a stadium, volleyball courts, a children’s playground, a multifunctional service building, and an open-air stage.

In Alūksne you can have a look at the history of the Latvian language and culture. This is the place where German priest Ernst Glück finished the first complete Bible translation into Latvian that was published in 1694. It became the ABC and the guide for the nation throughout the centuries. In the museum there are Bibles in 40 different languages, a Bible in Braille and many other exhibits. Not far away from the museum, at the Priest’s Manor, there are Glück’s Oak Trees. The priest planted them when he had finished the translation of the New and the Old Testament, but his step-daughter Marta later became Catherine I, the Empress of Russia.

If you want something more romantic than the stars and the moon, have a walk along the streets of Alūksne at night when wonderful light performances decorate the town. Five fountains in the Summer season sparkle in the New Palace Park till midnight, and colourful lights illuminate the pedestrian bridge in Tempļakalna Street, the Rotunda in Temple Hill and the 7th Sigulda Infantry Regiment Monument. Alūksne at night is as beautiful as during the day but much more mysterious. Could there be a better reason for a late walk?

All Latvians know the tongue twister “šaursliežu dzelzceļš” that means “the narrow gauge train”, but how many of them have travelled by it? For more than 100 years it takes people from Gulbene to Alūksne. Nowadays the little train travels twice a day. In Alūksne, the end station of this line, in the multimedia exhibition created in the historic baggage shed, you will discover the facts of railway history, hear 10 unique stories of the station, see who Bānītis is a friend, helper, workplace and source of inspiration.

Alūksne is a modern and developing town which cares about its cultural heritage and the beauties of nature and is always proud to show them to its guests. Discover Alūksne!